What person, or event inspired you or changed you in a positive way?

﻿ ﻿
With the onset of the 2011-2012 school year, I was thinking about people who have guided and mentored me through out my life.  One of the top most inspirational people in my life was my grandmother, Mary Steindorf.    She was not only my grandmother she was my mother, my business partner and my friend!  I lived with her on and off throughout my school years and she spent many hours teaching me how to sew. We made school bags, we made doll clothes, we made pincushions and I still have one!  I wish I could show you a picture but it's at the Florida studio. ;(  One year we spent hours sewing jumpsuits and then tried to sell them at a craft fair.  They did OK but the pincushions were the hit of the show.  My grandmother had drawers upon drawers of fabric, thread and patterns.  I loved going to Minnesota Fabrics with her and touching every bolt of fabric.  It was the 60's and polyester was just coming into favor.  She made me dozens of polyester pantsuits.  Yep, you got it, matching tops and pants.  I was the envy of every girl in the class. Then after I was married and had a children of my own, my grandmother gave me her prized singer sewing machine and I began sewing outfits for my kids.
﻿﻿ ﻿﻿
As the years went by I eventually went back to college and took fashion and costuming design courses that lead me into opening a costume shop in my area.  Still today I enjoy sewing and costuming.  Each year my grandkids request the costume they would like and I try to make exactly what they want.  So far they haven't been dissappointed and they wear them proudly!
﻿﻿ ﻿﻿ 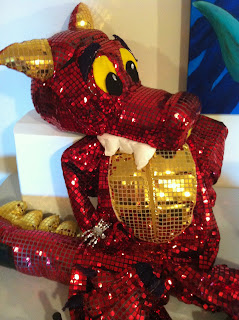 So, now my question to you is.... What person or event inspired you or changed you in a positive way?
and, do they know that they did?  Please leave a comment below or send me an email describing that person and his or her influences on you.  We would love to share them here on our Blog with our readers.  Thanks   -Kate
Created by Creativechickscafe 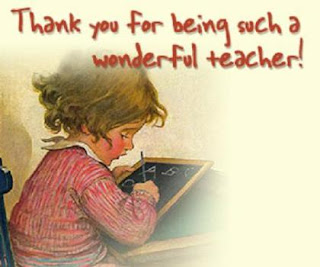 Hey Friends, I need your help. Click on our BLOG tab or our Facebook to share an inspirational story about someone who shared their knowledge, time and talent with you during your school years. In the up coming weeks we are honoring our teachers and all that they share!
Thank you,
Kate
Created by Patricia

It is no secret that Mona Rae Cich is of the most fascinating woman I have ever met. We have featured her seasonal creations throughout the inception of Creative Chicks Cafe. Why? Because her two hands have created the most inspirational dolls and quilts I have ever seen. If I had to describe her with one word it would be "Perfection."
From the studio of Mona Rae: 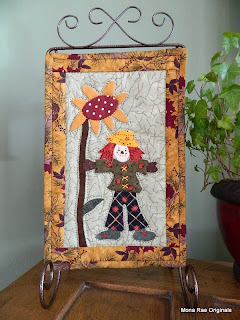 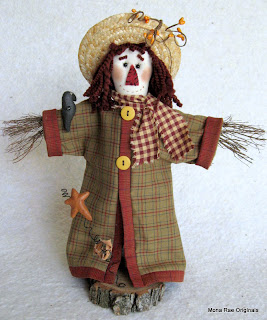 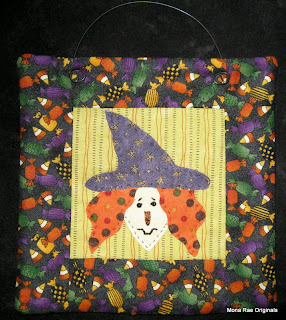 Autumn brings that time of the year that the leaves cascade down from the trees above, this is no different than when a dream is presented to me on what I should make next. Colors of leaves are swirling around in this cloud and it all comes together in a form of a Scarecrow, Witch, Pillow, or Quilt. When I'm stuffing a doll I can feel the time when as a child I would take giant leaps into a pile of orange, gold, brown and green leaves. When a Scarecrow is finished I look at the happy smile that I have just placed on his face but I'm sure that if I turn him upside down that face turns into a grumpy one that would certainly chase away all of the crows that want to upset my harvest. Speaking of harvest I encourage you to take a look at my Etsy page to see what item you might like to harvest for your home, also join my Facebook page and watch as my creations come to life, maybe you can even participate in one of my "Name the Doll" or "Count the Stitches on a Quilt" contest.
May the Leaves of Life Swirl around you and give you the gift of Happiness. 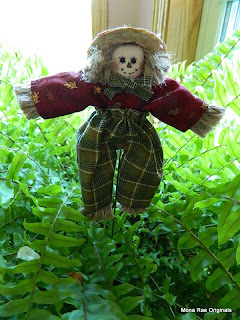 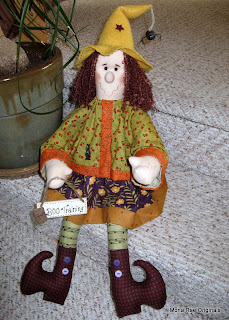 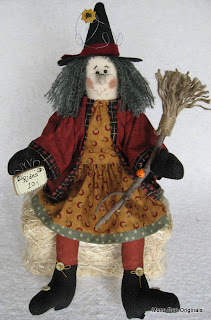 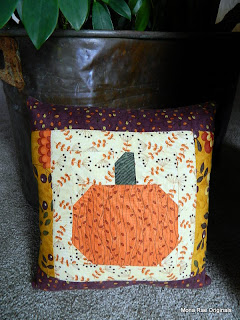 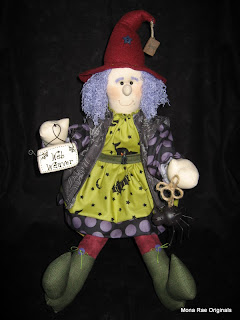 My Etsy Page http://www.etsy.com/shop/MROriginals?ref=si_shop or visit my website at http://www.monaraeoriginals.com
Created by Patricia

I have met many talented woman on my Creative Chicks Cafe journey, but I would have to say that Linda Welcome "Takes the cheese" with her adorable handcrafted Mice. Linda's Mice are composed of at least 16 pieces. She starts with the face/head which is made of 100% wool felt, it is a special color of silver gray with lots of "light" in it. It must be sewn turned inside out, stuffed and then the MOST important part is "Beading the eyes and nose." Linda states; "Not only is the beading important, but the bead must be glass not plastic. It must be round not cylindrical and also must be from a source that makes each and every bead exactly the same."  "This is what helps to make a Heartfelt Mouse so special, it is simply the sweetness of their face." This is Linda Welcome's story:
I grew up in the little town of Hazardville, famous for being the place where the gunpowder was made by Colonel Hazard in “Powder Hollow” that they used in the Civil War.  Hazardville is gone now. It was combined with Thompsonville to become Enfield, Ct.

My parents were older when I was born. My Dad worked at Bigelow Mills, the largest Mill in the area which made Bigelow Rugs.  He worked there for 55 years and missed only one day of work when he was injured.  Before that he was apprenticed to the Shaker Community. Yes there were Shakers in Ct. I grew up on Shaker Rd.
Daddy learned how to fashion their famous wooden hangers, chests of drawers and wooden bridal boxes. My Mom was a homemaker that did just about everything to keep my younger brother and me in clothes for school.  She stripped tobacco, plucked chickens and for over 15 years she “candled” eggs.  I use the deep cell egg flats in my production of the mice. Our home was comprised of 30 plus acres, mainly woods.  We didn’t have a paved drive way.  My first bike was made of plumbing pipe and joining pieces and painted red. I often wonder if that is why my calves are so big.  It’s really hard to peddle a bike that heavy, on a dirt road. When I was in 5th grade I wanted to sew so badly. We had an old treadle machine and I itched to use it. It was on that machine I made my first 'Outfits" and have been sewing ever since. I made money by working in the shade grown tobacco fields during the summer. In the winter I made clothes for "Fancy ladies" who could afford to have their garments fitted especially for them. I made a complete wedding dress before I entered the 9th grade, gown and trousseau.
My senior high year, I won Miss Teenage Enfield, again by sewing and competed with other girls from Ct. at the State Capital in Hartford. I was the “Hick” but it was a great experience and my Mom was so proud of me.
I went to Bay Path College in Longmeadow, MA and earned an AA. In Liberal Arts. My mother always told me I got the ability to work with my hands from her mother. She could sew and crochet just about anything.  After a few jobs I married, and crocheted my wedding gown and carried Lily of the Valley, my grandmother's favorite flower. When my youngest was 6 weeks old we bought our first house. Money was tight for gift giving at Christmas and it was then I created my Mice for gifts. I donated a small table top tree to the Wadsworth Atheneum in Hartford Ct. ( the oldest Museum in the US) during their Festival of Christmas Trees. The tree had my first 12 ornaments on it. The Mice were an immediate hit and I was given the names of all the people interested in purchasing them. After I completed all of my orders, we bundled up the children and delivered the Mice two days before Christmas. I made nearly $600.00, (which back then was a fortune) it was then I came up with my business name Heartfelt Ornament Co. My customers wanted to start a collection of Mice ornaments for all of the holidays, I branched out and extended my Mice designs.
Next, I entered craft shows and from there I was persuaded to do wholesale. I was accepted into the George Little New York International Gift Show in the American Craft Division. Other large wholesale shows followed and I was "Discovered" by large mail order catalogs and many small retail stores. I even sold to the Walt Disney World in Florida.
In 1995, QVC did a 50/50 Tour of the United States. Each state featured 20 artisans. Out of a hundred or so that displayed in Harford, I was picked as one of the 20. They chose my Santa Mouse and my Chocolate Chip Cookie Baker to be sold live on TV. We were filmed on the grounds of the State Capitol. Pretty heady I must say. Shortly after that, many of the catalogs and small retailers were forced out of business by the Orient. US crafters were selling their designs to China and China was doing an excellent job of reproducing them at half the cost of what US artisans charged.
My sales dropped and after being a homemaker for 18 years, it was time to get out into the real world and find a job. My office skills were not up to par, so I worked for Michaels Store then recruited to JoAnn's ETC until corporate decided to close the department and purchased ready made items from where else, but the Orient. Since the inception of the internet, I have been able to feature all of my work. I created my own .com website http://www.heartfeltornaments.com and joined ETSY in October of 2007  at http://www.warmth.etsy.com  I am also on Facebook and would enjoy some new friends. The times I feel most alive is when I am designing a new mouse, a new ornament or a new decorative accessory. Just about the only thing I do not do is Quilt... I'm saving that for my "Later years." Thank you, and I hope you enjoy my Mice as much as I love creating them.
Created by Patricia


This past weekend was the 58th Glenview Outdoor Art fair in Glenview IL. Jim Rasmussen, a new Facebook friend and fan of our Creative Chicks Cafe site just happened to have his booth set up. Thanks to Jim, he is always keeping us updated with his shows on Facebook. My step-son and family live a few blocks away and went to visit the show. Charly is a avid hockey fan, and I knew that he and his wife Erika would enjoy Jim's multi sport photography. I think they liked his work, as Jim made a sale. Please check out Jim's website at www.razfoto.com

Our mission at Creative Chicks Café to connect, share and inspire people to create. Thank you in helping our journey continue.

Patricia
I have lived in Minnesota my entire life. I love the changing seasons.
Newer Posts Older Posts Home
Subscribe to: Posts (Atom)