Sigurd F. Olson was the Bard in the North woods of Ely, MN. Also keeping up with this tradition is Pat and Donna Surface of Spiritwood Music in Ely, MN. Like Mr. Olson, Pat writes with depth and feeling, but Pat can sing and play guitar as well.  The Surface duo team is quite inspirational as Donna is a Performance Artist in Sign for The Hearing Impaired. Donna teaches basic signs during performances. Pat’s North woods music adds a spiritual tone which he calls “Canoe Grass”, including Folk, Bluegrass, Swing, Celtic, Gospel and more. According to Donna; “Pat’s primary instrument is his amazing voice, he plays guitar and is a songwriter.”
Donna went to college in New York City for art originally, but decided to study dance as it had been a love of hers since the age of three.  She studied acting and followed her passion to London.  Donna became a professional actor in New York where she performed on stage, film, and TV for 10 years after returning from London.  She became very interested in body building after a car accident injury and ultimately was nationally ranked as a “Body builder.” Donna went back to college for fitness, and is certified by the American College of Sports Medicine as a Health/Fitness Director. In addition to her accomplishments, she is a published author and wrote a book called “Burn Fat for Fuel.”  Donna moved to South Florida and swore she was” Going to die under a palm tree and never see another winter.” It was in Florida where Donna first met Pat and she never thought she would be seeing snow again. 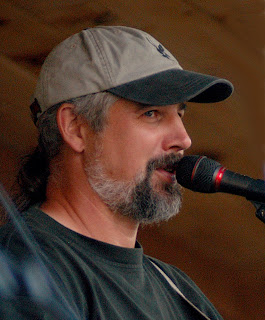 Pat was abandoned to the foster care system and finally adopted at the age of 3 and raised in Grand Rapids MN. He is called the “Gentle giant” as he stands 6ft, 8 inches tall and was a college all-star basketball player.  When did Pat discover the artist in him? The LaPlants (on his mother’s side) are award winning musicians and instrument builders. It was through their inspiration that Pat found his passion for music. Pat also draws inspiration from God, Family and God’s creation, The Boundary Waters Wilderness Area.  Their website is incredibly dynamic, you can listen to music and select by genre, artist, title etc. and read their full biography. Give a click on this link before you continue and see what I mean. www.spiritwoodmusic.com  They also promote their music at art and music festivals around the country and sell CDs and DVDs at concerts.  In addition to this they have hundreds of specialty shops around the country that sell their CDs.
Pat and Donna have lived in Ely, MN with their son Trevor for 12 years and built their own home and named it Spiritwood. A name so powerful that Pat established  his business and named it Spiritwood Music in 1997. It has always been the wilderness and nature of Minnesota that has inspired much of Pat’s music. Pat's popular band, the Boundary Water Boys, is a group of accomplished musicians blending fiddle/violin, dobro, guitars, bass, acoustic drums and harmonies - all augmenting Pat's celebrated voice. Pat's dobro player has won 2 Grammy Awards and has been nominated 5 times. Pat's fiddle player is Minnesota Instrumentalist of The Year. Pat has won several awards, including The Telly. Their recordings are a world class collection of classic folk and original tunes done in their signature fusion style. In addition to several recordings in the folk genre featuring Pat and his guitar, Pat and the Boundary Water Boys have recorded numerous albums showcasing their eclectic blend of genres. Something for everyone. Huge crowds attend their concerts in Ely, so many that the City closes the street when they perform. Pat has traveled throughout North America and performed for schools, colleges, churches, festivals and benefit concerts. He has reached over twenty million people and sold over 300,000 albums.
In 2007, Pat and Donna launched their own non-profit organization which support the quest to conquer Alzheimer‘s Disease after Donna lost her father Rocco Michael Passaretti  to the disease. It is called the “Forget Me Not” Foundation.  Please visit www.spiritwoodfoundation.org  where you can make a tax deductable donation to help fight this disease. Every 71 seconds someone is diagnosed with Alzheimer's Disease.
Apart from their own non-profit organization they also support many in the local community by doing benefit concerts including:
The North American Bear Center- (tribute song written by Pat- Makwa Manido)
The Northwoods Research Center-(tribute song written by Pat –Bear Walker-One Step at a Time)
The Will Steger Foundation-(tribute song written by Pat- Strength of Will)
Listening Point Foundation- Sigurd F. Olson
Dorothy Molter Museum- Root beer  Lady of the BWCA
International Wolf Center
St. Joseph’s Catholic School in Grand Rapids MN (Pat’s school growing up)
I had a few questions for this wonderful couple:
What is the most significant decision you ever made? “Choosing a Christian path, and leading with our Christian faith to become husband and wife”
What makes you laugh the most?  Donna says: “My husband-hysterical punny punsmith!!! He was born to pun, and Pat says I make him laugh as well.”
Who is your favorite musical artist? “Kermit the Frog- the Amphibian American artist.”
If you won a million dollars, what would you do with it? “We would donate a portion of it to the “Forget Me Not” Alzheimer’s non-profit foundation, help family and go fishing.”
What words of advice would you have for someone starting out? “Stay true to your soul; take the art form seriously, but separate art from the artist. This is a tough business; you will be loved and then treated with indifference. But when you receive your affirmations pay attention as this is your message, your compass. Have quiet time to receive this guidance. If you stay in the belly of the beast you are literally consumed and your creativity is severely diminished. Accomplish something every day! 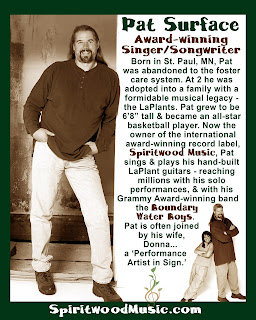 Patricia
I have lived in Minnesota my entire life. I love the changing seasons.
Newer Post Older Post Home